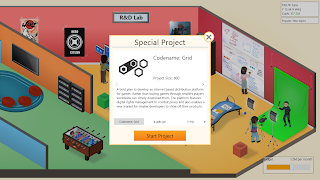 I read a story today that I thought was magnificent. An example of a business tackling a problem by using the problem as a bugbear for those who cause it.

If that makes no sense, let me show you the genius of Greenheart Games:

Their new title, Game Dev Tycoon, tasks you as a developer of software titles. You deal with all the usual problems of publishing, marketing, sales and piracy.

Of course, piracy. A problem that most publishers like to tackle by ruining or inconveniencing the game for those who actually pay for it (See EA's Sim City and Ubisoft DRM for but two examples). Greenheart Games on the other hand decided to be smart.

They created a modified, version of the game, and uploaded it themselves to the main pirate gaming websites, knowing that eventually it would end up there anyway.

They made one simple change: In the pirated version of the game, no matter what the player does, all of the titles they develop suffer from rampant software piracy. The longer they play the worse the problem becomes until it gets impossible to make a profit.

The outcome, not only do Greenheart Games now know that almost 94% of initial players were using the pirated version of the game, but they inspired some brilliant real life irony. Players of the pirated version appeared online in game forums, asking how to beat the rampant piracy in the game, and asking whether there was a way of researching copy protection.

So, a bit of smart thinking and they turned a potential problem into a PR news story, successfully helped to tackle the problem, AND got a clear and impactful message about the effects of game piracy across to those that pirate games.

If only the big publishers thought that smartly.
Ranted by Rob Mortimer (aka Famous Rob)