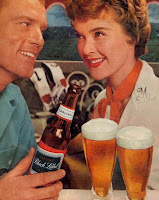 The client may want to get the message out there, but I seriously doubt if anyone will actually care.
Ranted by Rob Mortimer (aka Famous Rob)

I see your point and I agree that it's not most inspiring campaign around. However, in these times people are more value conscious and they want to know they are getting quality for their money. Furthermore, perhaps the most important aspect of the campaign is that it's BRITISH barley, try and think of a another well known lager that is British (ironically Carling is actually Canadian).