Although the last Sony Bravia ad didnt live up to the hype, it was good enough for me to await the next ad with keen interest... and so here is the first batch of information, and some pictures of the build up:

The next ad is built around the idea of play-doh! Which to me opens quite a few interesting possibilities.

Apparently it's being directed by Frank Budgen, who previously directed 'Gorgeous'; and shot in New York.

I have been sent a couple of pictures if people are interested: 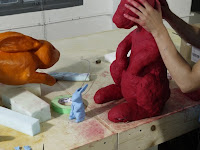 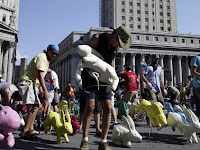 Just please be better than the last one... oh, and I am keeping my fingers crossed for a cameo by Morph.
Ranted by Rob Mortimer (aka Famous Rob)

I was also wondering (this is OT) whether you had noticed an increasing tendency for print ads to use Communist-era style graphics? I'm thinking Lastminute.com, Stella Artois etc. Is it a good thing or is it getting too much?

Its odd really. They convey authority yet also freedom by their associationswith communism.

Ahh, a typographical discussion on my blog...excellent.

Oh yeah - Pizza Hut was another one I noticed, and was the one that made me think it was getting very popular.