Why the Obvious is Often Wrong

Those moments come up sometimes, where the solution looks totally obvious. Where everyone can see and agree that there is a clear and simple solution that requires no further analysis.

Sometimes what seems simple is really not.

At Sainsburys, their new thinner bag used (I believe) 30-50% less plastic than their old one. Great, except for the fact that everytime you put something heavy or any items with a thin plastic wrap it pierces through the bag like a hot knife through very melty butter on a hot summers day. So then I had to either place a tiny number of items in each bag, or double bag everything. Either way I ended up using more plastic than before.

Now Morrisons. It appears that frankly they didn't do very much to change their bags at all. Perhaps someone who cares about the environment like me should protest... Yet what this meant in practice is that I could fit more in each bag, and because they lasted so well I could use them instead of bin bags, or reuse them for further shopping. Meanwhile the majority of Sainsburys bags were thrown away as they were ripped or stretched.

So by doing nothing and producing technically more damaging bags, Morrisons actually help me save energy. The simple answer wasn't quite the right one.

What about Muller, who decided in the maze of the yoghurt fixture to give each of their products the blue brand colours. Seems simple? Except that with so many products, it turned their space into an unpenetrable wall of blue, at which I watched several people look in vain for their favourite product and give up. The fixture might have been difficult to navigate, but their core audience knew what they were looking for.

Don't forget some small engines in cars too. I've heard plenty of stories about engines designed to be economical, but which require people to drive with their foot to the floor at all times; making it less efficient than many bigger cars in the real world. Simple way to reduce emissions? Not quite.

As most planners should know, things are usually far more complex than they seem. For me these examples remind me to always think about simple things in detail. Just because something seems like a quick and clear move, doesn't mean it won't have downsides.  Lest we forget "People prefer Pepsi to Coke, so let's improve Coke"...

So next time something seems really simple. Just take a minute to think, is this really as obvious as it looks?
Ranted by Rob Mortimer (aka Famous Rob) No comments:

As some of you will know, I am a big fan of Formula 1. I have watched it from a very young age and grown up watching the cars change dramatically over the last 25 or so years.

I was watching the first few races this season, when I was struck by a question. You see, the Lotus cars this year (formerly Renault) have changed to a black and gold colour scheme. This clearly is a reference to their classic 70's colour scheme from when they dominated F1 for several years. 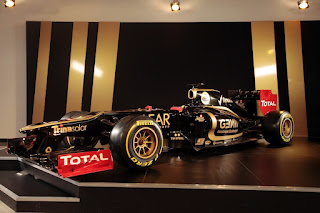 The only issue is though, the 70's car was called the John Player Special. A sponsorship that wouldn't be allowed now. So just how old and how subtle does sponsorship and branding have to be before it loses relevance?

I was born many years after the JPS car, yet I still know it by that name. So when that car appears in the same colours I inherently link it back to the old cigarette sponsored car. Even though it has no logos or other markings that resemble the brand.

A decade or so ago Ferrari were banned from using white and black barcodes on their car instead of the Marlboro logo in places where tobacco sponsorship was then banned. They were told it was still branding. Likewise Jordan putting Buzzing Hornets instead of Benson and Hedges. 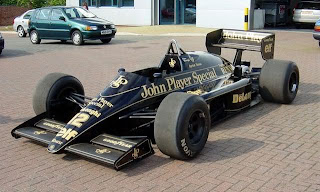 Would such a sponsorship be illegal under the current rules? I would have thought so, but if Marlboro paid McLaren to go back to their red and white stripes, but with no mention of Marlboro anywhere, what would happen? Could McLaren argue it is their heritage colour and not a sponsor colour? That would have to be the justification from Lotus if challenged too, surely?

Then if we follow the argument logically, is Santa appearing in Red and White a case of advertising Coca Cola to children? The red and white colours are from Coke's historical advertising, and as an HFSS product that kind of branding and brand colour usage wouldn't be allowed.

Where and how do we draw an acceptable line I wonder? After how many years does sponsorship become heritage, and when does it lose relevance to the former sponsor?

Images from: http://www.manipef1images.com and www.pistonheads.com
Ranted by Rob Mortimer (aka Famous Rob) 1 comment: 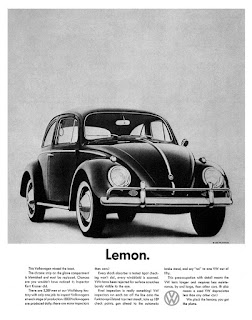 I thought that I was starting to get a little fed up with the spate of ads that show a sweet life story of someone growing up. John Lewis made it work fantastically, Google did it well, so have P+G, enough surely?

Well no. This is no lemon.

The new VW Polo ad is magnificent. It keeps the sense of humour their work has always had, but melds it together with a story and heart that would move a stone.

It keeps the legendary 'Small but Tough' idea and takes it somewhere new, arguably topping the John Lewis and Google work. This is beautiful story telling, the kind that will stick with people for a long time, rather like the iconic Changes ad, taking a moment of life and building up to it in a way that makes the strategic idea central to everything that happens. If you go into it knowing what the ad is for then the ending is obvious, but it doesn't really matter.

The music is fantastic, and sets the mood perfectly. It doesn't dominate the track like with the John Lewis ad, it soundtracks it, leaving the focus on the people and the idea. The direction stops it being cheesy too, and makes it feel like a real family. Whether parents will be persuaded to buy a Polo for their kids is another question, but that doesn't really matter. Watching this ad creates a huge warm glow around the car and the brand that will doubtlessly bring people to the showroom.

I was thinking the other day it's been a few years since I remember there being a great VW ad (2009's Like a Golf ad), that clock can be set back to zero now. Now how on earth do you top this?