Sony Understand the Importance of Listening

I've said before that it is so very important to listen to customers. Not that brands should do everything they say, but they should understand their behaviour, their concerns, and their desires.

In addition, clarity is one of the most important parts of communication. A good message said clearly is better than a great message said unclearly.

Last night at E3 (Gaming expo) Sony demonstrated perfectly the art of listening to your customers, and responding with brilliant clarity.

The internet has been full of discussion over the horrible security and sharing restrictions on the forthcoming Xbox One console. (You would no longer own your games - but licence them, publishers can ban you trading in or buying second hand games, sharing games with friends would be awkward and restricted, Microsoft would be able to turn your games off at their discretion, you HAVE to go online every 24 hours to authorise games, etc).

Microsoft have been unclear and evasive, leading people to presume the worst - they cancelled their E3 PR conference and made no mention of the issue in their presentation. There are currently many gamers who will point blank refuse to buy Microsoft's console.

Sony had yet to announce their strategy for this area. People from all over the world have been asking Microsoft and Sony to keep things as they have been, and that change will actually damage the industry as well destroying the rights of customers.

A huge number were watching the E3 presentations last night to see how Sony would respond.

What they produced was a masterclass in clarity. No gamer could be left in any doubt whose side Sony are on, nor have any confusion over their rights on the Playstation 4. Just listen to the reaction of the crowd (Who at one point were chanting "Sony! Sony! Sony!") and hear the pre-orders and good publicity bursting out from the seams. Literally tens (maybe hundreds) of thousands of people made their mind up what machine to buy at that precise moment.

If you take a look at the below diagram, it explains the confusion people have over what the policies of Xbox One mean for them playing and sharing games with friends, and how Sony have responded. (Original source of image unknown) 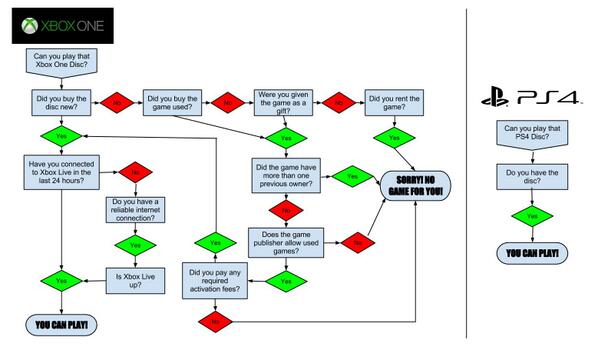 In addition, Sony produced this wonderful video which shows just how much simpler things are with the Playstation 4. (It's even better when you realise that the two people are Shu Yoshida, the head of Sony Entertainment Studios, and Adam Boyes, VP of Third Party Relations for Playstation) In the history of gaming, there have been few moments to rival what happened last night, when putting customers above all else paid off massively for Sony.

There has been a sad reminder this week that many people are still nowhere near as civilised as we might expect in 2013.

You may have seen the latest Cheerios ad from the US. It features a little girl asking her mum about the product. It's a little bit cheesy, but the ending is quite sweet.

It has however, managed to cause a huge amount of controversy on You Tube and other places for one simple reason, the mum is white and the dad is black.

Now I know what you are thinking, You Tube comments are usually the lowest form of social commentary in the entire world. But the fallout from the argument has moved on into Reddit and other sites too. The replies being made were so bad that the company had to disable them from the ad.

There is no argument to be had. People of different ethnic backgrounds fall in love and marry, just as those of the same ethnic background do. I can't imagine that anyone at the agency nor General Mills even gave a second thought that the ethnic make up of the family might be an issue, and it would be incredibly sad if they had to.

I'm glad that General Mills live in the modern world. I really hope they stand by their campaign, and don't feel pressurised to have an all black or all white couple in the next ad. I know no company wants to lose sales, but I guarantee they would lose more sales by appeasing scummy racists than by reflecting the multi-cultural, open world most of us recognise.

Edit: Apparently General Mills have said they will refuse to withdraw the ad. Adding: "There are many kinds of families, and Cheerios just wants to celebrate them all.” Good work.