Personally I class myself as someone who is very interested in style, but very uninterested in fashion (if that makes sense). I'm more bothered about how things look than who makes them, though obviously I have brands I like.

This week though, I have found a lot to endear me to a brand I had previously never really paid any attention to. Hermes.

First I found this wonderful finger skating video (via Spinning Around). It ticks all the client boxes of showing off the product, but it's fun and engaging to watch, and shot brilliantly. If you want to see how to make engaging content instead of ads, it's the best work I've seen in a while.


Secondly, I followed the link to the Hermes website; and was met with a cheeseboard of images. I started playing around and realised each one is a little story or idea that comes to life when you zoom in. Including a lovely tale of a womans diary and her Hermes scarf.

The whole site is full of fun, interesting, engaging and thoughtful content. It's sufficiently well thought out that you almost want to see them all to make sure you don't miss out on something good.

This is attitude and style over fashion. but by doing it it makes me notice the fashion element more. Excellent.
Ranted by Rob Mortimer (aka Famous Rob) 1 comment:

I've been to GBK (Gourmet Burger Kitchen) a few times, I've usually enjoyed it. Food that is nice for a not unreasonable price.
However last time I visited I had a number of issues with the service that spoilt the meal a bit, and made me decide to email their customer service.
That was over two weeks ago. I have yet to receive any response whatsoever from GBK. My email was polite and constructive, yet I haven't even received an auto "someone will get back to you within xxx days" message.
Is it any wonder people now use Facebook as a base for their complaints and comments if companies are this useless as responding to emails and other queries.
So as they appear to not be bothered about speaking to me, here are my issues with my last GBK meal:
So we definitely won't be going to that GBK again, and with customer service like I've had so far (I.e.: None) It's likely I won't be going to any other one either.
Ranted by Rob Mortimer (aka Famous Rob) 2 comments:

The past few days have been completely bizarre in the world of planning. A series of allegations and stories have emerged that have created a storm in the plannersphere, and in particular, have led to lots of calls for one particular person to be punished and turned into some kind of lynching figure.
I'll make it clear that I only slightly know both main parties, and I don't know which allegations are true and which are not.
The problem I have is that in a scenario like this it is impossible to know what are the truths and what are lies. Clearly the person in question has done a number of things that he should not be proud of, and possibly some that he could get into serious trouble for.
However, we must be wary of creating a mob attitude until we know the full truth. We don't know the reasons, the coincidences, the personal opinions and vendettas that could change things for each side of the argument.
He may very well be guilty of all of these things, but he equally could be innocent of many of them. I just hope we can all be as understanding and considered about this as we would be if it were a piece of insight or information that we were using for a client. We would* never try and sell in baseless conclusions to clients, let's not do the same here. Let the people with the evidence and the people with the talking to do solve this, and we can all discuss it then.
The last thing we need is for mud slinging, in-fighting, side taking and bitching to take this difficult situation and create a long term problem between people in our field.
*I hope!
Ranted by Rob Mortimer (aka Famous Rob) 2 comments:

I've been thinking about this a bit recently. Does anyone still use the internet for browsing?

I talked about it a while ago, but have noticed the topic going around a bit recently.

I cannot remember the last time I browsed the internet. I go on for Facebook, for twitter, for news and so on. I never randomly explore, I just type it into google or Wikipedia and go. The curation and filtering gives me most of the stuff I would want to see anyway...

Perhaps it's a little strange we still call our internet software Browsers, or that we refer to browsing the web, which is now the last refuge of the bored user. What we do now is watch channels, or check our social content lists.

I think my analogy from two years ago still seems to ring true:

You remember having 4/5 tv channels, you always found something to watch. Then multi channel tv came along, and it was a realm of choice, every possible subject and whim catered for through the wonders of satellite technology.


There is infinite knowledge and content out there for us to explore. Accessing it has never been easier.

Then we got settled, then we chose favourites, then we flicked... we flicked some more... then we never stopped flicking. Our standards became so high that suddenly that half interesting documentary or obscure Indian film became wastage instead of the only thing on. We said 'there's nothing on!' even though there clearly was lots of things on.

Yet the more there is too see, the more fussy we get.


Well that's what is happening to the net. Facebook, twitter, blip, blogger, your news site... thats it. You are done. No time left to random surf, and even then you do it on wikipedia.

We use our filters to flick for us. The cloud searches en-mass, and we get everything handed to us, which just makes us more fussy. I used to read for hours about random topics because it was amazing to see so much detail. But when you can learn anything, what do you choose? Too much choice is no choice at all.


You could say the only browsing we do is flicking channels...
Ranted by Rob Mortimer (aka Famous Rob) 2 comments:

"The advertising ... this year had been produced in a year of economic recession. It is my experience that, in times like these, both the quantity and quality of advertising is diminished."

"All magazines must learn that good design does pay"

"It's very fashionable to knock the work we earn our living at, but it's always amazing to me that [campaigns] ever end up as good as they do"

"Considering the commities that scripts seem to go through and the number of odds and sods who put in their destructive, and genereally ignorant, two pennysworth, it's a miracle that [good work] ever [gets] through"

A step in the right direction 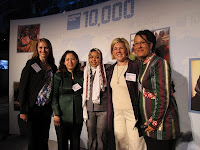 There are many brands that feel cold and alien. Look particularly at some of the financial and banking brands, multi-billion dollar institutions yet they have no connection or relevance to the vast majority of people. There are plenty of business and management brands that fall into the same trap.
If you wish to see an example of how to instantly humanise and improve the perception of your brand, look no further than the 10000 women project being run by Goldman Sachs.
A five year project providing business education and guidance to 10000 female entrepreneurs who otherwise would not be able to access that kind of training. It feels like a warm and genuine piece of community work from a brand that has usually felt blank to me.
Not only that, but I take away from the video a better sense of what Goldman Sachs feels like as a company; as well a strong perception of accessibility and friendliness. The opposite of how I pictured the brand not ten minutes ago.
"No country will ever achieve its' full potential if half of its' talent pool is stymied or under-represented" - Too right.
10000 Women

(found at BrandKarma)
Ranted by Rob Mortimer (aka Famous Rob) No comments:

I'm by no means a Spurs supporter (Hammer by birth, United by home) but I totally agree with Harry Redknapps decision to stop giving interviews if he is charged with misconduct following the weekend's bizarre goal.

Firstly I think it was a goal, the ref didn't blow the whistle therefore no foul had been given. Presuming a foul was every bit as presumptuous as Nani had been in grabbing the ball.
However, and this is the big issue for me. What is the point in having interviews when the managers are unable to speak their minds? I'm not saying they should be able to abuse referees, but to not be allowed to criticise them is ludicrous. I don't want robots after a game, I want to see managers talking honestly about the game and the performance of all involved. How would we feel if managers were no longer allowed to criticise players?
There is a lot of talk about respecting the game and respecting the ref, yet it always feels as if the refs have no respect for the teams or supporters. (Obviously they do, but we never get to see it) They are immune from criticism and never have to justify their decisions. By locking them away as untouchable it just drives the resentment felt by supporters.
We understand that everyone has bad days, players, managers, referees alike. There would be so much more respect for the refs if they just came out for 5 minutes and explained their decisions. We would even understand fully if they came out and admitted their mistakes, we don't expect them to be perfect, but when a bad decision costs a team 3 points or a place in the next round of a cup; a simple apology might go a long way towards healing the wounds.
Ranted by Rob Mortimer (aka Famous Rob) 2 comments:

When I first saw the T-Mobile Welcome Home ad I asked the question that seems to be reverberating around adland. Has flash mobbing and crowd participation jumped the shark?
Certainly anyone who watched the E4 sting from last week would find it hard to argue that the 'slick polished performer' singing and dancing style of flash-mobbing that T-Mobile originated in ad terms has gone beyond parody, that piece of work killed stone dead any credibility a brand could have in doing that kind of ad.
However, I'm glad to say that the new T-Mobile ad has managed to avoid jumping the shark. It may be getting ready to jump, but this ad had enough in it, and was sufficiently thought out that it still felt quite original (In UK terms, SNCF did very similar things in France), and kept me engaged. There was a nice choice of tracks and it felt much less cheesy and contrived than I would have expected for a 3 minute (Yes, THREE minutes!) ad in this kind of campaign. The performers felt more natural and less overtly polished, like real people getting together instead of a clearly hand picked group of dancers.
I think the big question for T-Mobile is where to go now. By time the next campaign comes around, will it be too late to flash mob? Happily though, I think their strategy has the potential to keep moving and evolving, there are plenty of ways to share in life without 200 people descending on an airport/train station/shopping centre/bus stop/cafe/public toilet (delete as appropriate).
Ranted by Rob Mortimer (aka Famous Rob) No comments: