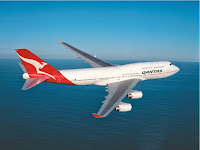 When I was planning my move to Australia, I would see the red tail fin of a Qantas plane and look forward to where I was going. This work makes me think about both where I am, and where I've come from. For a brand, that's pretty amazing - even if most people aren't expats... outside of Bondi anyway.
Ranted by Rob Mortimer (aka Famous Rob) 1 comment:

Flake it til you make it

Every year we see loads of brand crossovers, where a company (usually a big holding brand) mixes together two products in order to try and leverage the benefits of each.

One brand crossover that I'm currently intrigued by is between two brands that maybe don't match quite as well as those.

Head and Shoulders with Old Spice.

At a product level it makes sense. At a brand level though, it seems like a far bigger win for Head and Shoulders, and potentially a damaging move for Old Spice. Head and Shoulders has traditionally had terrible functional communication, whilst Old Spice has revitalised itself by moving into a strong creative area.

The comms to promote this (at least here in Australia) is essentially a weaker version of the Old Spice idea, set against Head and Shoulders brand colours. Whilst it's better than anything I've seen from Head and Shoulders, it pales compared to what has been seen in the past year or two for Old Spice.

I can see three potential plans in play here.
1. The success of Old Spice being used as driver across a range of brands until the core product branding suffers from over-stretch and dilution.
2. This is the first step towards launching an old Spice shampoo. But given there is already Old Spice bodywash, why wouldn't they just jump straight in? Or at the very least utilise the most liked brand to drive the combination. As even if Head and Shoulders sells more, it lacks the strong connection.
3. A short term attempt to revitalise one brand by risking the credibility of another.

Either way, it will be an interesting one to follow.
Ranted by Rob Mortimer (aka Famous Rob) No comments: