Let me interrupt my summarising for a nifty new version of the Drench ad featuring everyones third favourite Thunderbird.

Ad that should have worked but didn't quite

A nice idea, which didn't quite come off as well as it should. Though its not bad, it could have been magnificent.


Best Ad Ripped Off From Something Else

This TFL ad worked really well except for the fact it was someone elses footage that they copied without asking permission. Tut.

Snap was back for a little while off this piece of brilliance.


The 'I wish I'd Thought of That' Award

I think almost everyone in our office wished they had come up with this. Brilliant stuff.

Sometimes brands get stuck in their way of doing things, and often advertisers get pulled into that trap. This award is for those who have taken big steps towards freeing their brand from bad ads...

Traditionally Microsoft have been the butt of every Mac owners jokes, and also of PC owners jokes. Their branding and packaging has been at best boring, and at worst diabolical.

Over the past few years though they have made big strides, and this year saw two campaigns that really demonstrate a change in the M$ behemoth.

The ads with Bill Gates and Jerry Seinfeld didn't change the world, but it really boldly pushed Microsoft into a new territory. Self parody is dangerous, but they struck the fine line well.

Then they followed with a more upfront ad, but one that actually makes Apple look a little like the bad guy. It almost reminds me of 'being number 2' (as someone, possibly Northern said this year), Microsoft speaking from second place; a remarkable change to what has come before.

I'd love to think that this will continue, and that Microsoft will keep developing in the right direction.

One brilliant ad, compared to... erm I can't remember anything else they have done since ello Tosh. A dull safe brand brought bang up to date in a few weeks. That's an improvement I like. Also shows good progress at Grey, which is more good news.

BBH, as good as they are; have always struggled to make Tango ads live up to the quality of what HHCL did. It's always lived in the shadow of slaps and blackcurrant patriotism.

Not anymore. BBH have embraced their inner orange man and woken up a dying brand with the wonderful Save Tango campaign.

Welcome back Tango. Can Fist!

Famous Rob's Review of the Year - Part One

Not only did this ad fail to make me notice how nice the new Megane is, it put a huge doubt in my mind about the entire brand. "Remember when you said you'd never buy a Renault?" ... No. I didn't, but now i'm not sure where that came from... who said it? Why wouldn't they buy one?

It's also a bit patronising and a little bit insulting about how we live our lives. But this gets the award for singlehandedly scaring me away from a brand. Quite a remarkable achievment for an I've only seen three times.

Patronising, irritating, cringeworthy, throw your sofa at the TV to make it go away annoying.
If it hadn't been so good at catching the bland AOR rock shitegeist it would have won...

Runners Up: Iceland - Cold Outside

Wow. This is bad, so bad it goes beyond being 'so bad its good' and into 'so bad its horrific'.
Only saved from worst ad of the year because it at least attempts to play it silly, and without Kerry in it might have worked. Jason and the Nolan aren't that bad, but Kerry just proves that she can't cut it with acting or singing showstyle.

2 ads for the proce of one.

A cheesy sports montage followed by a crushing barrage of unhindered sales pitch, beating you over and over the head with its desperate pleading for you to buy a more profitable a better razor than the Gillette one you have strong brand loyalty with already.

Three expensive sportsmen joining in the fun makes it even more of an assault on the eyes and ears.

Saved from winning for two reasons: 1. They are still better than the 'dad razor for xmas' ad from a year or two ago. 2. Thierry Henry is a footballing legend and I'd hate him to win worst anything.

Perhaps ironically, Thierry was spokesperson for the last great Renault ad. The man has va va voom. Maybe the two could get back together and save themselves from ad hell... 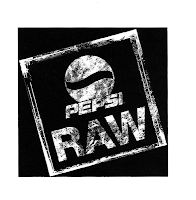 There is currently an interesting battle going on in the world of cola drinks. The fight over nature. And perhaps the most interesting of all is that for once the product strategies of the two main brands are very different.

Pepsi have introduced raw, an all natural version of pepsi. Whereas coke have simply started saying that coca cola is already made of all natural ingredients.

It will be fun finding out whether introducing a new drink makes normal pepsi look artificial, or if it puts its own stake in the ground that cokes claims can't quite match in perception.
Ranted by Rob Mortimer (aka Famous Rob) 1 comment: 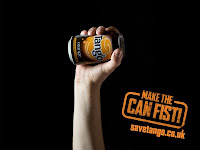 Looks like BBH has rediscovered its inner HHCLness with the latest campaign for Tango. After years of declining sales they have launched the save tango campaign; which along with a brilliant website, appears to wholesale bring back the tone of voice much loved during the era of orange slappers and Ray Gardner fights. (In fact they even have them as classic ads to watch on the site)

Its all done with tongue in cheek and with that brilliantly sarcastic yet witty voice. The opening video is magnificent, with wonderfully written lines like: "that utterly senseless and irresponsible act was to illustrate a point, that a much loved brand is being beaten from existence." and "Even local schools are helping out, St Enids has introduced child labour to the curriculum." The 'can fist' symbol is a brilliant bit of hookery.
Games such as 'click as many times as you like, the more you click the more you help us'; in which cans constantly appear as you click; are brilliantly done.
The soprano voice for titles, the desktop images with 'Rainforests can grow back, save tango', the Tangometer sitting at 'Up the creek'; its all produced and thought out so well that it actually does remind you of the brilliance of their past, and how sad it would be to let it go.
So people. Can Fist. Save tango, if not for the drink, for the ads.
Save Tango
Ranted by Rob Mortimer (aka Famous Rob) 5 comments:

Worst TV Ad Of All Time?

I challenge you to top this for a piece of dated cliche ridden shockery. It is frankly one of the most eye gougingly bad pieces of advertising I have ever come across.

The creative sat opposite me was lost for words when I showed him this.

A 1984 Toyota Corolla ad from South Africa, the worst ad of all time? Please prove me wrong...
Ranted by Rob Mortimer (aka Famous Rob) 4 comments:

Hi everyone! You know this blogging lark doesn't just allow me to get angry at ads I dislike, it ocassionally passes along interesting opportunities to do things and speak to people.

The Clio Awards are celebrating their 50th anniversary this year in Las Vegas, and the online entry system has now opened; allowing the cream of adland to submit their best work.
As part of this, I have been given the opportunity to speak to the director of the Clio Awards, Wayne Youkhana. I thought it would be nice to open up this interview to questions from my wonderful readers!
Please add your questions to this post, and the best selection will be put forward in a week or so.
Thanks
Rob
Ranted by Rob Mortimer (aka Famous Rob) 5 comments:

And before I finish my lunch 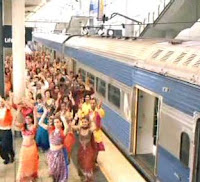 It's time to rejoice at the return of annoying stereotype cookery sauce ads. Did I say rejoice, sorry I meant smash the tv in annoyance.

The latest Uncle Bens ad depicts Indian folk in the only way possible (apparently), as Bollywood stars desperate to get their hands on the yummy sauce. (Cooked of course by a middle class white couple)
Why not go all out, show them all working in call centres? Or packed onto trains (oh no wait, they hint at that).
Next up is the Chinese soy sauce ad featuring children being forced into Olympic training, the American BBQ Sauce ad with Texas rednecks shooting their guns in the air, the UK Steak sauce ad with beefeaters sharing tea with the queen, and you get the idea.
Please can someone come up with a better way of advertising foreign influenced sauces than resorting to annoying stereotypes in cliched situations.
Thanks to CMM for reminding me of this.
Ranted by Rob Mortimer (aka Famous Rob) 1 comment:

An interesting idea for O2, text a cameraphone pic of the shiny I in their latest 'Priority' to 63333 with the letters NYE and you could win tickets to events at the O2 in London. (aka the Mobillium Dome)

It's a nice piece of interaction to get people texting in. How well it will work I don't know, but its the sort of idea I'd like to see more companies trying.
Ranted by Rob Mortimer (aka Famous Rob) No comments:

You should all go check out the new blog for Breitenbach /Brown, the new venture from Marcus Brown. If anyone deserves some success it's him.