A Whopper of an Unhappy Meal

It's been all over the internet the last few days, so I doubt many people will have missed the Burger King 'letter' to McDonald's or the subsequent reply that left many people feeling disappointed.

I've also read a number of opinions that range from 'McDonald's made a mistake' to ' Burger King trolled Macca's' to even 'This was stolen from a student portfolio.'

I can't comment on the last one, but I definitely can on the first two.

For me it boils down to this: Burger King, whether deliberately or not, put McDonald's into a situation that they could not win.

Now that's not to say that Macca's couldn't have worded their letter in a much better and less condescending way. For example, by agreeing to work together next year, or by making a donation to the Peace movement in lieu of action. But the fact remains that the closing P.S. salvo of Macca's reply was spot on. 'A simple call would do next time."

That sentence calls out the Burger King ad for what it was, an ad. Yes it was hoping to team them up for a great idea, but it was done in a way that would have ensured it was only on their terms. If BK truly wanted to do something awesome in a team on Peace Day, then they would have discussed it fairly and evenly behind this scenes. A peaceful (marketing) Coup d'état is still a military manoeuvre, it is not a truce.

A great idea, which was let down by the execution on both sides. It ended up trying too hard to be a marketing execution, not an idea execution.
Ranted by Rob Mortimer (aka Famous Rob) No comments:

Of course everyone has seen it by now, particularly if you live in London. It spread out like the usual virus across the advertising landscape, covering offices in the sound of 70's pop rock... and with good reason.

It won't surprise anyone to know that the latest John Lewis ad is excellent. A piece of wonderfully thought out and crafted creativity that just invites you to want to watch it every time it appears. Even the 90 second version holds the attention enough to warrant a view.

But as I said, that's not surprising. The thing that really interests me though, is the puzzle it raises about how we think about creativity across channels in 2015.

You see, in many respects, this work is incredibly dated. I don't mean the 70's soundtrack and styling... but the fact it's a big budget, long, TV ad. It's the kind of work that is regularly thought of as dying, and that we should move completely away from. Not only that, it's an ad which, at the heart of it, hides its idea. That sense of nervousness and uncertainty around insurance. It could potentially be too subtle to work across every kind of format without good creative guidance.

So is this a last hurrah for TV? Well, no.

As we see at Christmas (the British Superbowl), people are keen to see adverts they might enjoy. John Lewis are among the very best at having campaigns that people actually go out of their way to see (as someone who has worked on insurance brands, doing so against the barrage of price pushing takes a brave client). When you think about it, that's pretty amazing.

We live in a world of consistently always-on, encroaching advertising. Designed to intrude on you at all times it's possible. More than ever people are getting sick of advertising communications, just look at the rapid growth in online ad blocking tools - we may be honing the art of banner copy, but those click rates are still hiding down through the mud underneath the floor. We all know, as I mentioned a couple of posts ago, that the reason for this is simple. Most ads are shit.

So in this complex many channel world, how does a piece of work get so well known and liked that the audience actually WANT to watch it? That simple thing called creativity. Well thought out, well written, well directed work. You Tube, for many people, is now a TV channel in itself - and simply paying your way doesn't work there. You need great pieces of work, and sometimes not achieving it is actually the cause of your channel problems. If you have the quality, particularly consistent quality, it's possible to break the cycle of advertising apathy.

So yes it's great to have new ideas that take advantage of all channels. Yes it isn't enough to just have terrible TV ads anymore. But what this ad shows, is that we too often forget the third way. Doing excellent work can sometimes be the surprisingly simple answer to your channel question.

Great new post on the hard work behind Innovation over at Mr Hovells Northern Planner blog. I suggest you take a look.
Ranted by Rob Mortimer (aka Famous Rob) No comments: 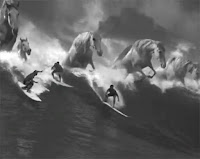 I've seen a number of discussions recently regarding the standards of advertising in the modern day. These range from: 'I remember when ads used to be this good.', to 'I wish long copy was as good as this these days', and ''remember when marketing wasn't full of so much bullshit'.

All of these views make some relevant points, but the problem I see is a very simple one: Advertising has always been largely shit. We just remember the campaigns that aren't, exactly like the general public.

Yes it might seem strange to criticise most of the output of the industry I love, but everyone knows it. Every regular person knows it. Every client knows it. (Perhaps bad clients could argue that the 50's were a golden age, where every ad was full of endorsements, product features and packaging shots...) Everyone in adland knows it. We shouldn't shy away from this fact, because it's what drives those of us who care about creativity to do better. Watching TV and wanting to throw the remote at the screen, that's our opportunity.

Indeed, it is the same as every other creative industry, be that music, film, design, architecture, etc etc. It always has been, and more or less always will be.

For every piece of genius long copy that was made in the 70's and 80's, there was also one of waffly, feature blasting junk. For every smart creative TV ad that people adored, there were ten shouty washing powder ads. For every cool, avant garde 90's piece like Guinness Surfer, there were ten post-modern thought-free travesties promoting alcopops. For every Tango Blackcurrant there was Elton John singing about Diet Coke.

Besides, even if every single campaign made today was amazing, we would still pick the best 10-20% as the ones that were 'really' good anyway.

I think it's hard to argue that there aren't too many people spouting bullshit, particularly regarding big data, social channels and online advertising... still... but this is just the same as the agencies that said radio was dead when TV came along. That's the problem with predicting the future and anticipating audience response, most people aren't ever going to be right. Trusting in the people who guide your brand was vital then, and it's vital now.

Actually, it's even more important now. With the vast proliferation of available channels, and the wall to wall nature of advertising, having the right, smart people, is crucial. Were those geniuses of the good old days any smarter than the best creatives and planners we have now? Probably not. They made the best of their time, and we make the best of ours. I love the work of John Webster, but his ads for kids didn't have a hugely complex list of do's and don't's that make creativity that much harder. His awesome Hofmeister beer ads didn't have to worry about cute creatures being seen as advertising to children... or at least not at first.

Anyway, The point is. Advertising has always been an industry made up of both smart and creative people, and those who wish they were smart and creative. The good always produce good work, the bad always produce bad. The precise definition of what passes for good and bad will change, as will the issues that inspire both genius responses and bullshit responses. Wishing for a golden era to return is often just a sign that we are worrying too much about the past rather than trying to improve the future. Let the past, both good and bad, inspire us and remind us of what we can achieve - but don't let it get in the way of clear thinking.