For a couple of years I really wanted to buy an album called Buiiki Kaesu by Japanese band Maximum the Hormone (kind of insane rock/metal with jpop bits).

The only way I could hear the band was to play You Tube videos with iffy quality audio - most of these got taken down after a while too.

I did these actions for over two years, and realised that their record label simply didn't want me to able to listen to the band through reasonable legal means. It was even taking actions to stop me using the only real legal source I had.

So in the end I just started streaming it from web music sites. For which the record label gets precisely nothing. More importantly, the band, who I want to support, gets absolutely nothing.

Amazingly, more than fifteen years after the launch of Napster, many record labels STILL do not get the world we live in. They are stuck in their 20th century approach, putting their profits above their audience.

Which brings me to advertising.

Everyone has I'm sure seen the recent news and posts about massive growth in ad-blocking. Some people are carrying on as normal, others are panicking like it's the end of the world... in a way perhaps it is. This for me is starting to feel very much like the launch of Napster did for record labels.

This could be our moment. The moment our audience decided they had enough with us doing things in an old fashioned and 'audience-last' way. The moment where agencies start to become divided into those who get it and those who don't.

Take DVDs and video games. Two mediums that are very wary of piracy. I just bought a DVD, and inserted between the menu and the show was a US FBI anti piracy message. Well gee, thanks for hassling me after I ALREADY paid for it. I imagine the illegal versions wouldn't have this, so making it useless.

Video games too were notorious until recently for putting the customer last when it came to security and anti-piracy measures. It started with complex sheets of paper full secret codes, then moved to software that slowed down the PC, and complex installation and registration procedures that just frustrated the very people who had already bought the game. Illegal copies meanwhile, had these features edited out. A pointless irritation symptomatic of bad profit-first thinking.

(Incidentally it's why I prefer the campaign approach to piracy used in Australia. Instead of negative, it makes you feel good by simply saying thank you for buying legally, and points out how doing so helps programmes get made.)

Just like record labels, this backwards thinking does nothing but piss off the very people it needs to target. A situation which feels very very much like most advertising right now in this always on world.

So maybe right now we need to decide which side we are on. Is it the audiences, or is it the industry focused status quo? This has been coming for a very long time. Just like record labels it's not like we weren't warned, repeatedly. Web ad blockers have been around for nearly as long as the internet. Displeasure at ridiculous banners has been around just as long, the death of Myspace as a serious social site seems YEARS ago, but that was largely down to bad banner utilization pissing off the users (along with shitty UX). Frustration with bad social has also been clear for a long time, and the backlash against native advertising started last year too. We know people have either had enough or are getting close to their limit with bad and forceful marketing.

Now good creative is definitely a great tool to help overcome this, but we need to do more - because great creative that can't be seen might as well be shitty creative. So this becomes an issue for media agencies too - are you on the side of the audience or the companies you buy space from? If it's the latter, you could be left behind. 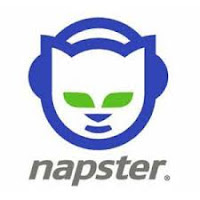 One positive in this scenario is that planners become more important. Understanding the audience, putting them first and trying to genuinely connect with them will be more important than ever in an age where they will be increasingly likely to have to decide to come to you. Not in a 'brand love' way, but simply because they know you respect them and give them something (be that content, offers, information, etc) that they are happy to exchange their time for.

So. Who will be the EMI, the Universal Music, or the Warner Music of adland - and who will be the Napster, the iTunes, the Spotify? I can't wait to find out.
Ranted by Rob Mortimer (aka Famous Rob) No comments: