Rob is on Holiday - Normal service resumes next week

The Cannes 48hr Young Lions competition is back on again, and there's plenty of good work turning up in what I've seen so far.

My excellent colleagues @ilikemyquality and @andthisisjames have produced a great entry; so I thought I'd tell you how to see it!
Go to the Cannes Lions You Tube Page and search for 'cracker', if you like it please vote for it :)
Ranted by Rob Mortimer (aka Famous Rob) 3 comments:

daveknockles Good morning, friends. I see Britain can't make its fucking mind up. I can resolve this: whoever has the biggest logo forms a government.

daveknockles: @FamousRob Cameron'll have the biggest lego. I bet he had a playroom full of the stuff when he was a kid - including the spaceships.

FamousRob: great night at #rosesawards . Three golds and a silver, awesome. Oh and i think im still a bit drunk...

SteveKuncewicz: @FamousRob You won't be the only one. I got home ratted and stayed up watching the Election. Even a bacon sandwich can't save me.

Will_Humphrey Just met one of them (Jedward). No, I don't know which one.
.
Ranted by Rob Mortimer (aka Famous Rob) No comments:

An Election Day Message from The Ad Pit 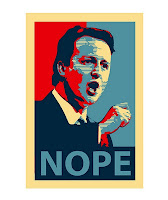 If any of you vote Tory today I will be extremely disappointed in you.

Labour may not have been all we hoped for back in 1997, but that is no excuse to forget what happened to the working class during the last conservative government. If you are young and don't remember life under a conservative government, lets just say finally getting rid of them was our Obama. If you think you hate your prime minister now, just wait til 2 years into a Cameron majority government.
I don't know one single person anywhere who likes David Cameron, not one single person. Most people see him as a necessary evil to get rid of Brown, but why not change our stupid electoral system for the better and vote for a party that actually cares about everyone instead of a select few? The only major party that opposed the war on Iraq. The only party with a leader people actually like.
But if you don't vote Lib Dem, I won't mind. Just don't vote Tory, please.
Ranted by Rob Mortimer (aka Famous Rob) 6 comments: