So. Its nearly Christmas day. Time for the ad pit to have it short holiday break.
I will resume posting just after new year, and will be checking for comment regularly.

Andrew - The Band a Week WILL be up and running again once my new house has the internet.
But until then:

Also, the great Battant I mentioned on that blog are playing Sheffield on Feb 6th, if you are about hope you (and some other MBH folk) can make it. They are well worth seeing.

I planned a Xmas ad review, but campaign (where I was recently mentioned, thanks Russell!) did a good one, so there isnt much more I can say there.

Except. One ad must be commented upon:

Oh dear god. Bad dubbing, cheesy acting, dull present theme, etc etc etc. Its an ad that is so poorly made that Just For Men would reject it for being too tacky. Come on Gillette, you make good products; why not try some decent ads for once?!

Tag's for the Memories

I therefore have to write 5 things that you probably don't know about me:

1. The two things i've always wanted to do in life are music and advertising. In fact, when I was about 7, I wrote that I wanted to be a Rock Star on a piece of work we did in class. The teacher (Mr Hughes, who was the coolest teacher ever) went and got an electric guitar, amp, and set it up for me to play in class. Unfortunately I didnt actually know how to play (I was 7!) and strummed what must have been one HELL of a racket. Sorry everyone else who heard it.

2. I'm not actually that bad at cooking, despite having been a student. I can rustle up some tasty dishes. Though I did burn my hands aged 9 because I went to take something out of the oven and pulled my hand away as it was so hot... and as i pulled away my hand came out the glove... ow.

3. Once my mate and I were messing about before a gcse exam and for some reason i got sprayed in the head with deep heat... the whole exam i smelt (nay stank)like an injured athlete. Im sure people wondered what on earth it was.

4. Im quite an Otaku. I like a lot of geeky things, particulary computers/consoles. I generally like anything creative (design, architecture, typography, art) , and the mix of creativity, interaction and fun is something that captures my imagination. Hence me lining up on day one to get a Nintendo Wii (which is amazing if you havent got one.).

5. I am also an extreme muso, I love music, I write/play/perform/record it. My ipod has music of all types, from death metal to synth pop to punk to hip hop. My taste seems almost random, i'll find songs I love from bands hate. For example: Whilst I am in no way an abba fan, I think Super Trooper is a fantastic song, the harmonies are clever, the bass line is amazing, and the words are deceptively dark. Also, I can't stand Oasis, even though their debut album was so full of potential which they went on to blow.
My electronic stuff is here: http://www.myspace.com/fireflowermusic, and I plan to gig again next year. I was once in short lived, dive playing, but very decent Chesterfield band Subverse.
Now... The five people I want to tag (if they have not already been tagged, everyone seems to have been by now) are:
1. James (Technogoggles)
2. The CMM Chimp
3. The Hidden Persuader
4. The grumpy genius of George Parker
5. Andy @ Cynic (He has a blog, but I do not know its URL. Rob, can you please ask him to do so and ill link to it. Maybe he can use the planningbastards one I mentioned...!)
Ranted by Rob Mortimer (aka Famous Rob) 5 comments:

You Just Have to Think Architecturally

Northern Planner had a great little post on architecture the other day. It reminded just how much I love it, and how it can be an amazing tool of communication. How it can demonstrate power, thinking, forward (or backward) movement, and sheer attitude.

Possibly the most striking building in the world is the Bank of China tower in Hong Kong. Its bold, iconic, and contentious. Hong Kong architecture is a battleground of positive and negative Feng Shui. The BoC tower has sharp angles that give out negative energy and push it out of the points (one of which faces the old British governors mansion, to which they build a pond in the way to deflect said energy after a death was blamed on the negative energy from the building).

The HSBC Building, with real working guns (I am reliably imformed by a HK resident) on the top left aimed directly at the Bank of China tower. Note those guns are NOT on the HSBC building image on HSBC bank notes: 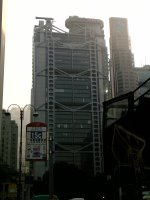 Now see just how close they are. Try coming up with a convincing (hehe) argument that these buildings do not represent a HUGE piece of brand communication in the region, more so than most advertising ever does...: 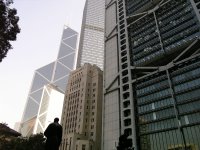 Yet another example of why people seem to respect Mother so much.
As guest editors of creative review, they have decided to offer one page of the magazine to anyone (barring advertisers/companies) to do anything they like.

Found a really interesting report whilst at work, from Grant Thornton. Its all about what factors are important to businesses, and which ones seperate fast growing, slow growing and static. Looking at it I found plenty of useful bits of information related to marketing and advertising, so please allow me to ramble about those I can remember now im home...


Having a strong brand was only the 4th contributing factor to high growth businesses, price was 10th, and a genuine USP was only 12th. Does this not appear to go slightly out of sync with what we hear about unique selling points being so important?

Alysoun Stewart, Director, Commercial and Strategic Solutions at Grant Thornton.
“Our observations suggest that the Fast Growth Businesses know that customers buy the ‘experience’, even though the product or service may not be hugely different from what they can get more cheaply down the road. This is a key factor in creating differentiation and
enticing customers to buy-in emotionally to their brand.”

It seems unusual that this survey clearly shows flexible businesses grow faster, yet most of what I hear about clients from agencies is that they are completely unflexible. Maybe if they treated their advertising in the same way as their customers (after all, thats who it is for) they might end up with better ads.

Also unusual. Businesses that said their branding was the main thing that made them better than their competition were static. Is that due to static businesses being more established brands who have run out of growth? Or is it managers who think they understand their brand when it actually is failing to speak to people? But then... those same static business say that weak marketing and communications is the second biggest factor holding them back. Sounds like bad management and failure to understand branding and marketing to me.

A big point was: "It is the value proposition behind the brand, rather than the brand itself that high growth businesses focus on."

Another thing, there was almost no difference in the importance of "creative marketing" between the growth ranges.

The big tips they gave for businesses was to understand the customer and what they want. I couldnt agree more. If only more brands did.