My favourite strapline at the moment comes from an unlikely source, a cosmetics brand, namely No.7 (owned by Boots). They've made a line that is simple and brilliant. Frankly (given it's been around for a year or so) I am surprised I haven't seen it before.

A two word summary of everything the product is and does, in a phrase that has positivity without being cliched or patronising. It says everything that "Maybe she's born with it" or "Because you're worth it" does, but in fewer words. Even the voiceover says it with such enthusiasm and a tone that feels warm and contagious.

This is one of those lines that needs some good media behind it, because it's so clear and so simple that I can see people taking to it and turning it into a shared bit of culture around make up and cosmetics. Woman walks into the room with her friends and they all go "Ta Dah!".

Great work. The only drawback with a line that great is that it deserves magnificent creative ideas to show it off, I hope they can live up to it. 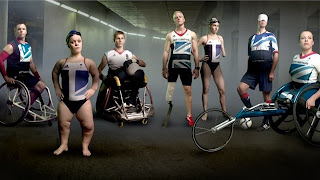 ﻿﻿I don't like to criticise ads in an unconstructive way, because I know how hard it is to create good campaigns, and to get those good campaigns through the client.
﻿﻿

But sometimes you see an ad that just has no redeeming qualities whatsoever, and there is little you can do but wonder how in the name of all things creative that monstrosity ever got to air.

﻿﻿ May I introduce you to the Colgate Pro Gum Health ad. 30 seconds that single-handedly takes advertising back 30 years. Their recent ads have all been poor, but at least they were just simple, style free ads that showed you some product and information while interacting with what seemed like normal people.
﻿﻿

This ad though, commits some unforgivable cardinal sins of advertising.

What decade are we living in?

This ad couldn't feel more dated if it was shot in black and white and fronted by someone who is dead. It talks to people in a way that seems to presume they have all the intelligence of a intellectually challenged loaf of bread. If you want people to understand the facts then just tell them in a compelling way, don't break out sales tactics that would be laughed at even by Alan Sugar.

I find it hard to believe that a creative agency could produce this, an ad completely devoid of any charm or creativity whatsoever. I don't know whether this is the fault of the agency or the client, but this kind of advertising will not engage or inspire anyone. Telling the facts can be a good strategy, but not like this. I spoke to someone at another agency who said it felt so negative that he was actually thinking about giving up using Colgate. I say this as someone who has been a loyal Colgate user for over a decade, their products are good, but talking about them in this way is just horrific.