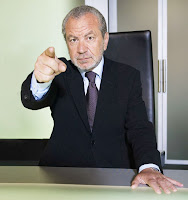 We all watch the Apprentice and see this mocked up Alan Sugar in a big tower (studio) with clever (stupid) business people (idiots) trying to win an important (ish) job with the mogul.
But I was thinking the other day, just how big and powerful is Alan Sugar?
He has a reputation for being the kind of no nonsense, no emotion salesperson that most agencies would hate to work with. He comes across as someone who puts features, name and price at the centre of the communications universe and has no time for anything even vaguely intangible or creative.
Which got me thinking. How many really successful Amstrad or Sugar backed products can you think of? (Amstrad computers was huge, but based on buying out and renaming Sinclair just as they started to decline) How many lasting brands has he built?
Amstrad computers sold ok, he sold them by mail order only and no-one really cared. His internet phones sold ok. Everything he does is adequate and makes profit; but nothing is ever truly successful.
It says it all that (as our Head of Planning Steve said) his biggest cultural impact on the country is as the 'boss' on a TV show. No product or brand he has produced has ever had a real impact. With some better agency thinking and creative, he could have been so much more.
You can say that he is successful, and yes he is. But he is just a wheeler dealer, a Del Boy made good. I can't help thinking that had he a better understanding of branding and how to sell using communication, he could have been a Branson.
Note: My aunt's shop is on tonights show. I shall cringe but also be kind of proud!
Ranted by Rob Mortimer (aka Famous Rob)

He's made most of his money recently through an exclusive deal with Sky for their boxes, especially Sky+ ones.
As you say, most stuff before that was maybe not that great technologically, but then again I think it sold well, he generally has a good eye for the market. His PCW green screen word processor was a very good device at the time - it didn't follow any standards, it even had it's own 3 inch floppies, as a "computer" it was hopeless, but it did word processing very well, so it sold well. You have to applaud him.

Amstrad products always struck as me as if they were Sinclair products without the attention to design!

That's not to say he isn't a success. But it is very much on one term.