Marketing Lies That Need to Die No.5 - Low Price + Service Charges Does NOT Equal Low Price

The other day I went to buy tickets to see one of my favourite bands. The tickets were $70 each.
My girlfriend and I didn't think this was bad for the size of band and venue, so we went online to buy them.

We selected standing, and went through to the second option, which was 'Ticket selection'. There were two options: 1. Let them send you a mobile ticket - Cost $9.80 per ticket. 2. Collect at the door - Cost $9.80.

Well I'm not quite sure how either of those cost $9.80, but we clicked on mobile tickets and went to the next stage.

There we entered our details and clicked to the total, whereby another $9.80 'service charge' was added. So our $140 tickets ended up totaling basically $170, and that was without using Credit Card, which would have invoked ANOTHER charge.

You know what we did? We cancelled and ended up not going, the extra charges were sufficient to reshape our perception of the gig cost.

Now I understand service companies have to make money, but given EVERY ticket company adds these charges, is it not better for everyone to show ticket prices including ALL charges?

Showing us artificially low prices just ends up creating grumpy customers in the short term, and puts people off attending events in the long term.

Would you go to the supermarket and be happy with Bananas costing $1.99, then getting to the counter and having a 'Delivery' charge and 'Customer Service' charge added on? Mind you, supermarkets do usually do the 'Buy one for $5 get one free' when the cost the week before was $3.50.

The desire to show low prices ends up hurting everybody in the end. Customers have an initial 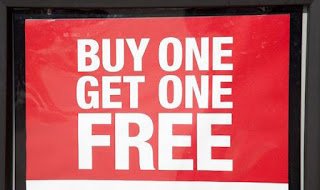 bargain rush followed by an immense feeling of being treated like shit, and business lose both long term custom and profitability in a race to the bottom advertised price. My old agency tried to get one airline in the UK (a market whose service charges are particularly hated) to change their practices, and did a good job shifting them the right way until they got merged.

There's also the annoying 'permanent special offer' messaging, but I'll come to that another day...

This has happened in so many industries, but still companies are so addicted to low price at the expense of all long term sense. They know that people have a behavioural reaction to low prices, but they don't see the logic and impacts for the long term.

I've seen it first hand with FMCG brands resorting to 95% sales on discount because they are so frightened of having unit sales numbers drop... they then ask what they can do to improve their brand perceptions. Indeed I saw one brand who helped turned the entire category into a stream of constant discounts. This problem has also creeped it's way through to the world of gaming, where 'Free*' games dominate mobile downloads to such an extent that a whole generation of kids are growing thinking that all games are deliberately rigged to induce payments.

However. People aren't completely stupid, and we no longer live in an age where you could get away with only a little bit of shared frustration. Eventually these shitty business practices must come to an end... either that or someone else will come and reinvent your market like Uber or DollarShaveClub did with shoddy taxi company service and expensive blade replacements.

That said. I think Fascinating Aida said it best: