If there is one policy that sums up just how completely hopeless and backwards our government is, it's the utterly contemptible Workfare programme. A policy that manages to combine being offensive and being strategically useless for its stated aims.

For those outside the UK, Workfare consists of the following:

Selected people who are claiming unemployment benefit are required to work for six weeks, unpaid, doing menial/manual labour jobs at (mostly) large retail/restaurant companies. If the person is doing volunteer work, that has to be cancelled, and does not count.

It is essentially government mandated slavery. It is 'the poor house' of Dickens era brought back in sheep's clothing. It single-handedly proves that the government has no real desire to create jobs for people, because the scheme is so mind-bendingly backwards that it actually makes it HARDER for the unemployed to get work. 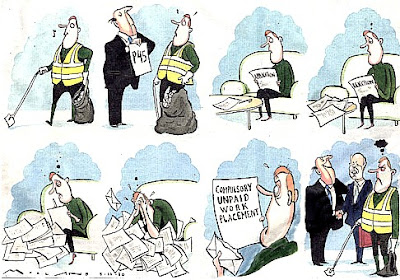 Why on earth would a company hire a new staff member when they can simply recruit one for free through the government?

Even more astoundingly. These (mostly) big companies get paid £1000 for every worker they take on. That's right, these companies including Poundland, Tesco, Asda, Argos, Debenhams, Pizza Hut, McDonalds and many more are being PAID to have someone work for NOTHING.

You could argue that it's valuable work experience, but it isn't. It's lowest rung, menial jobs with companies that are unlikely to hire now they have better-than-free labour. Besides, if you want to get the long-term jobless working, then surely showing them the cash benefits to working (I.e.: Pay them) will be far more of an encouragement to want to get back to a job. Just forcing them to work for nothing is hardly likely to inspire them to update their CV.

Plus, the fact that people have to cancel doing socially beneficial volunteer work is beyond insane. It means someone who is unemployed has to give up providing a useful contribution to society, and to give up work satisfaction in order to do forced labour.

I heard that in my local area, £2m has been put aside to force 2000 people into this form of slavery. That's the equivalent working hours for 230 full time jobs. So you could very easily argue that, in one area of the country, the government is paying £2m to prevent 200 jobs appearing. Even taking into account that some companies will pretend more work is there to get the cash, it's still ludicrous.

Even splitting the goverment cash between the company and the worker would be infinitely better. At least that way everybody benefits. Even if it does still put companies off hiring, at least the worker gets paid.

A far more logical scheme would be for the government to give the worker £200 for a week or two of work, and then give the company an £800 incentive to hire that person and keep them for at least year.

This scheme has all the hallmarks of people who have no compassion, no sense of reason, and no real desire to improve the lives of anyone outside their circle of millionaires and billionaires. It is a fucking travesty that has no place in the early 20th century let alone the 21st. It is to the shame of Britain that our ministers have allowed this to happen, and no minister that voted for it should EVER be trusted again.
Ranted by Rob Mortimer (aka Famous Rob)

I recently came across your blog and have been reading along. I thought I would leave my first
comment. I dont know what to say except that I have enjoyed reading. Nice blog.
I will keep visiting this blog very often.
flights to Umrah
cheap flight to jeddah
flights to jeddah
umrah jeddah flights
umrah flights from London
cheap flights to umrah